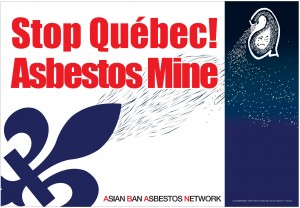 joint letter from around the world representing seventeen different countries.

ADAO Commends Asbestos Victims’ Organizations’ Joint Letter and “Voices on the Wall” Campaign, Demonstrating Global Unity in Call to “Say No to Jeffrey Mine” in Canada

Hundreds of Asbestos Victims Worldwide Make Urgent Request to Canadian Government   Washington, DC … December 8, 2010 — The Asbestos Disease Awareness Organization (ADAO) today commended the “Voices on the Wall”Facebook effort and Asbestos Victims’ Organizations’ global letter campaign. This campaign harnesses the voices of more than 1,400 Facebook messages from concerned individuals from across the globe requesting that the Canadian government say “No” to shut down the Jeffrey Mine. In a joint letter delivered today, global asbestos victims’ organizations requested that Canada not extend financing for this asbestos mine and also end the resulting exportation of asbestos to India. The letter represents an outcry of pain from 40 organizations from around the world representing seventeen different countries. The letter was delivered to Canadian Prime Minister Stephen Harper, Québec Premier Jean Charest, and President Bernard Coulombe, Jeffrey Mines Inc. An excerpt from the letter states:

“We, as organizations representing asbestos victims, are extremely worried to learn that the government of Québec is considering giving $58 million financing to an anonymous consortium of investors so that they can re-open the old underground asbestos mine pit. Asbestos, a known human carcinogen, claims more than 100,000 lives every year. We know, we have buried our loved ones and fight these preventable diseases every day.”

Seven members from the Solidarity Delegation from Asia to Québec representing Japan, Indonesia, Korea and India, will be attending and presenting at numerous press conferences, meetings, and briefings, including to the Canadian Parliament, have issued an urgent humanitarian appeal to the government to stop the revival of the Jeffrey Mine.

“We have come to Québec to make a direct, personal appeal to the Québec people,” said Sugio Furuya, leader of the Solidarity Delegation from Asia to Québec. “We decided we must do everything we could to try to stop a terrible wrong: the financing by the Québec government of the Jeffrey mine.”

One of the hundreds of “Voices on the Wall” messages made a poignant statement when a young woman who lost her father to mesothelioma wrote, “when you cannot breathe, nothing else matters.”  Know that our loved ones mattered, and you can “choose life” rather than certain death for asbestos victims in the future by no longer mining or exporting asbestos.

Linda Reinstein, CEO and Co-Founder of the Asbestos Diseases Awareness Organization commented on the significance of the campaign, “With Voices on the Wall the powerful joint letter, and Québec delegation, we are extremely pleased to see such global unity confirm the need to end the mining and exportation of the lethal asbestos mineral. We are hopeful that the Canadian government will take this protest to heart. Certainly it is time to put people before corporate profits and stop the Canadian mining and exporting of asbestos to Asia.”

The World Health Organization, The Environmental Protection Agency, International Labour Organization, and U.S. Surgeon General agree: all forms of asbestos are carcinogenic and there is no safe level of asbestos exposure.