India: The Rajasthan Asbestos Mine Workers’ Dharna is Successful 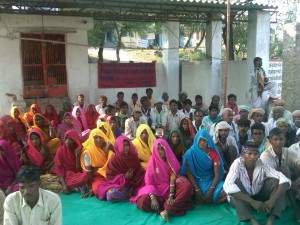 Former asbestos mine workers on hunger strike in Rajasthan, India

In 2007, the National Institute of Occupational Health conducted a test on Asbestos mining, studying and surveying 164 mine workers to determine the prevalence of the occupational disease Asbestosis. Of those 164 labourers, 93 mine workers were suspected of suffering from Asbestosis. The Mine Labour Protection Campaign (MLPC) and the Rajasthan State Mine Labour Union have sought the list of 93 Asbestosis victims listed in the test from the NIOH. Even after filing for the results under the Right to Information Act, MLPC and these Asbestosis victims have repeatedly been denied the list of the 93 affected workers even though this information is necessary to make a proper medical diagnosis and to file for the necessary relief and compensation. MLPC has brought this dire matter to the attention of the District Collector of Udaipur through a memorandum and office visit. As a result, the District Collector assured us he would approach the NIOH on behalf of these ailing workers. However, much time passed without any results or communication from the District Collector. Seeing as this is a life and death issue for these afflicted mine labourers, a dharna was staged by some of the mine labourers at the NIOH on Meghani Nagar, Ahmedabad from January 4- January 7, 2011 in order to bring their plight to the public attention and to speed up their pending cases with the

Due to these continued efforts, the NIOH has agreed to conduct fresh medical tests on the 164 workers to determine who the 93 afflicted with Asbestosis. The ICMR has given permission and ordered the study be carried out within 7-10 days. Should the new NIOH tests validate our suspicions of Asbestosis in the 93 workers, they will subsequently be eligible for compensation as guaranteed under the Workers Compensation Act.