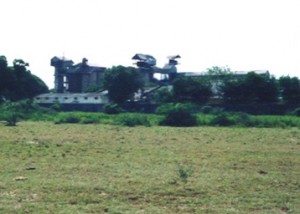 Shree Digvijay Cement (SDCL) started commercial production of cement in 1949. A plant to manufacture asbestos cement pipes was commissioned in Nov.’62, with Johns Manville Corporation, being the technical consultant. In 2006, Gujarat Composites Ltd Company was divided into two companies namely Apurva Vinimay Ltd and Infrastructure Ltd. There are about 1150 workers in both the divisions.

In 1986, National Institute of Occupational Health conducted a medical camp and found 12 workers out of 20 to be suffering from Asbestosis.

In 2003 OSHA and Kalyaneshwari organized a medical camp and found 62 workers to be suffering from Asbestosis. Out of the 62 workers 20 have died. So far none of the diagnosed workers have been compensated under the Employee State Insurance Scheme (ESI).

In the year 1995 Supreme Court of India gave a landmark judgement for Asbestos Industry. However none of the guidelines issued by the court are being implemented by the company. Factory inspections are also not carried in a proper manner. The environment around the factory is especially bad and one can see numerous families living under Asbestos Sheet roofs which have deteriorated over the period. Children can be seen playing with broken asbestos material pieces.

The asbestos used is imported from Canada, Russia, Brazil, Khyrgysthan, Zimbabwe. Import from Canada has stopped effective July 2010 as per unofficial sources.