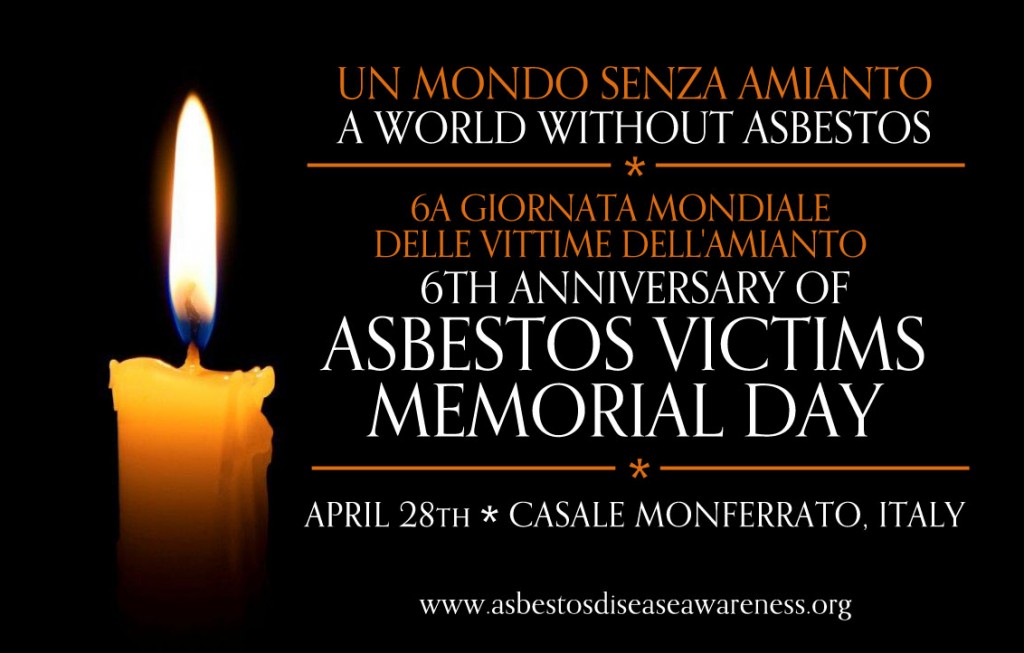 On April 28-29, 2011 in Casale Monferrato, Italy, a group of delegates from around the world gathered together at the Associazione Famigliari Vittime Amianto (AFEVA)’s “A World without Asbestos” conference calling for a global ban on asbestos and continued fight for justice for the victims of this tragedy. The following letter was drafted and signed during the conference and was sent to the United Nations.

Below is an English translation of the actual declaration which was written in Italian. View the Italian version HERE.

A meeting “A WORLD WITHOUT ASBESTOS”

On occasion of the 6th world day of the victims of asbestos of April 29th in Casale Monferrato (Italy) with the participation of delegations coming from USA,Brazil,France, Mexico, Spain, Switzerland, Great Britain, Netherland , lots of Italian regions , Italian trade unions organizations and international ………

We approved the following final document.

Since asbestos is really harmful, it’s absolutely necessary and urgent to eliminate it from the environment where we live.

Within Europe, a continental tragedy of immense proportions has been created by the industrial use of asbestos-. As a result of this, hundreds of thousands of deaths have occurred. This is likely to be an underestimate, since data documenting this humanitarian tragedy is sadly inadequate. Nowadays, this epidemic of asbestos induced disease has expanded to developing countries, which continue to use asbestos. The existence of a double standard between industrialized and industrializing countries is ethically unjustifiable and morally corrupt

There is a moral imperative to undertake medical and scientific initiatives to prevent the occurrence of asbestos diseases. Many citizens are at risk of disease from the deadly asbestos fibers in their lungs. Research regarding prevention should be given the highest priority. A framework delineating the timely diagnosis of and treatment protocols for all asbestos related diseases (asbestosis and asbestos related cancers) is needed and should be regularly updated.

The “controlled use” of asbestos is commercial propaganda foisted on unsuspecting and vulnerable populations which are unable to evaluate the hazards presented by using all types of asbestos. It is imperative that chrysotile (white) asbestos is listed within the Rotterdam Convention as a substance requiring prior informed consent by importing countries.

The environmental contamination caused by asbestos exxraction and use is yet another humanitarian catastrophe which endangers the health of current and future generations. Widespread pollution remains in the atmosphere, water, soil and in buildings in areas such as our communities in Casale Monferrato, Italy, Corsica France, Widnes UK and Getafe, Spain.

Affected communities which have attempted to progress the asbestos remediation deserve and require the support by International Agencies, Regional authorities and national governments: it is essential to identify the areas polluted by decades of asbestos exploitation and to access the funds required and the expertise needed to deal comprehensively with the asbestos legacy .

The UK case against Cape Asbestos and the criminal trial in Torino against top executives of the multinational Eternit stand as iconic symbols of the struggle to obtain justice for asbestos victims. In the Italian trial, more than six thousand people are seeking judicial redress. What we have seen throughout this legal process is the importance of adopting an international perspective on the rights of victims and the crimes of asbestos multinationals.

All victims of all asbestos related diseases (malignant and others) have the right to be compensated for their injury, regardless of whether their exposure were occupational, environmental, domestic or otherwise. In the first instance, the provision of compensation must be delivered in a prompt and equitable manner. The French experience (FIVA) provides an example of how this could be achieved. If it is decided to establish a fund, is should be financed by contributions from public and private employers. In all cases, legal rights to pursue judicial means regarding injuries and esponsabilities must be preserved.

In conclusion, the asbestos industry is a criminal industry, exposing massive populations to mortal risks in pursuit of profits. We demand justice.

[Written and signed by conference participants]