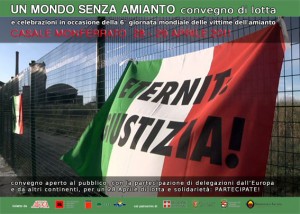 ‘An appalling disaster’ this is how PP Guariniello described the events involving the asbestos multinational in the court room today.

The owners of the Eternit group, the asbestos-cement enterprise with plants in Europe, Africa and South America, are charged with wilful failure to protect their employees and factory neighbors, resulting in thousands of deaths from asbestos. Specifically, the charges are wilful and deliberate environmental disaster (for pollution and the scattering of the asbestos killer fibres) and deliberate and wilful failure to implement precautions in the work place.

The Public Prosecutor’s request to increase the jail sentences to be imposed on the accused took into consideration ‘the incredible seriousness of the damaged caused’, and the serious degree of willful and direct intent; it is alleged that even though the accused were aware of the foreseeable risk of asbestos exposure, they chose not to take the preventative actions needed to safeguard the health of employees and local people.

The defendants’ propensity to commit crimes is, the Prosecutor alleged, proven by their failure to disclose information regarding the asbestos hazard and the impact this material could have on the community; their lack of action laid the groundwork for the appalling disaster which has befallen the affected communities.

The trial is expected to conclude by the winter of 2011 with a ruling by the 3-judge panel. The defendants have not testified in the trial. Swiss billionaire Stephan Schmidheiny is estimated to be spending 10 million euros a year on legal defense and public relations services.

MILAN, Italy — A court in Turin on Monday requested jail terms of 20 years against a Swiss billionaire and a Belgian baron in the biggest ever trial over asbestos-related deaths, judicial officials said.

Stephan Schmidheiny, the former Swiss owner of the Eternit construction firm, and Jean-Louis Marie Ghislain de Cartier de Marchienne, a top shareholder from Belgium, are being tried in absentia.

The trial is a mass civil action in which some 6,000 people are seeking damages over the deaths of around 3,000 people who worked at or lived near Eternit’s plants in Italy.

The prosecution requested the maximum sentence of 12 years imprisonment and demanded eight more years be added on the grounds that asbestos can trigger ailments decades after exposure.

“I had never seen such a tragedy…. It has affected several regions in our country, employees and residents. It is still sowing death and who knows how much longer it will continue to do so,” prosecutor Raffaele Guariniello said.

The prosecution’s five-year inquiry determined that the two executives were effectively responsible for Eternit’s Italian operations at the time of the contaminations in the 1970s, a claim rejected by the defence team.

The pair are accused of causing an environmental disaster and failing to comply with labour safety regulations.

“We are satisfied, this is the result of a 30-year struggle for justice and health during which we never gave up hope,” said Bruno Pesce, who heads an association representing victims from two of Eternit’s northern plants.

“The fact that this trial was undertaken (in December 2009) was already a huge victory but now the prospect of justice being done is starting to take shape,” he told AFP.

The fibrous crystal mineral is primarily used as building insulation for its sound absorption and resistance to fire, heat and electrical damage but exposure to it can cause lung inflammation and cancer.

A verdict could be handed down at the end of the year.