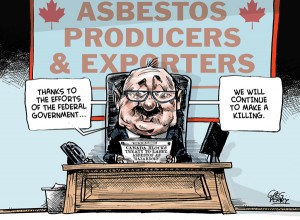 If the consortium succeeds in implementing its plan, it will export millions of tonnes of asbestos to Asia for the next several decades. But the asbestos industry no longer enjoys the widespread support it used to enjoy in Quebec and, in the face of public and political opposition, the consortium has clearly had huge difficulty in finding sufficient willing investors.

Meanwhile, at the town of Thetford Mines, the last operating asbestos mine in Canada, run by LAB Chrysotile Inc, has been experiencing a variety of problems, including a brief labour walk-out and mining difficulties due to weather and land slides that have ruptured and closed the road, which is used to transport asbestos from the mine.

In spite of these difficulties, it appears that the company and the local United Steelworkers union have plans to expand the mine into a new area and continue exporting asbestos for years to come.

Opposition to the asbestos industry is growing in Canada. Medical and health professionals have spoken up loud and clear, opposing plans to revive the Quebec asbestos industry. The Canadian Labour Congress has challenged the Canadian government to put people’s lives ahead of politics and end its support for the deadly asbestos export trade.

Now, the voices of families who have lost loved ones to asbestos disease are starting to be heard more and more. Their message is powerful and it reaches people’s hearts. It is they who will defeat the asbestos industry and our Canadian government, which has so shamefully sold out to the asbestos lobby.

It is through their human stories and their inspiring and selfless courage that the battle will be won so that we can prevent any further asbestos tragedies.