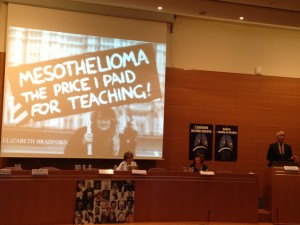 I’ve had the pleasure to attend the conference ‘Europe’s Asbestos Catastrophe: Supporting Victims, Preventing Future Tragedy’ in Brussels, Belgium (17-18 September 2012). The focus of the conference was on the asbestos situation in Middle- and Eastern Europe and aimed to bring together asbestos victims, trade unionists, campaigners and representatives of NGOs and other bodies to share knowledge and network together.

Laurie Kazan-Allen, one of the first speakers, immediately struck right at the heart of the matter: workers have a right to health. Health is a human right, nothing less. Knowingly exposing workers to the health dangers of asbestos dust is a violation of their human rights to health and to work in a safe environment. I would add to that: also their right to family life, which is greatly imposed on during the suffering of an asbestos disease and subsequently prematurely ended.

What struck me particularly were the vastly different levels of knowledge on asbestos throughout Europe. Poland, for instance, takes prevention to asbestos exposure very seriously and apparently invests significant efforts in training Labour Inspectors, businesses and workers about asbestos dangers. Workers who have been exposed, are given health check-ups regularly during decades, so much so that one wonders, given the long incubation periods of asbestos diseases, if this is really useful. But the point is: they are aware of health risks and are willing to address them. However, in Albania, even Labour Inspectors know little of any health hazards relating to asbestos. This sadly says a great deal about the level of asbestos awareness of the general population – and also, as a consequence, of its daily exposure to asbestos. Even Labour Inspectors are not trained in recognizing asbestos. An Albanian speaker mentioned the difficulty to prove the existence of asbestos dust, given the scarcity of suitable neutron microscopes. No mention at all was made of any liability law cases, which is perhaps most indicative of how far Albania has yet to go! 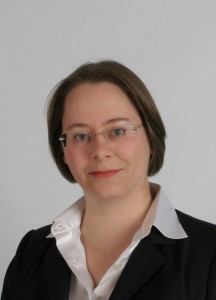 All speakers agreed on one major concern: that demolition workers are the new main risk group. It is they who are most of all in need of safe working conditions and proper monitoring that such conditions are realised. For they are the first victims to fall if attention to this is ignored. Also it was repeatedly pointed out that both ignorance of asbestos and ignored asbestos can lead to countless additional deaths, e.g. through exposure in the home, in schools, train and bus stations, the environment, dirt roads, etc.

Michael Lees (AiS, see www.asbestosexposureschools.co.uk) in particular made a very interesting and moving presentation on the daily exposure levels of teachers, students, cleaners, cooks etc. in English schools. He pointed out how asbestos insulation board, asbestos roofing and other asbestos materials are abundantly present in the schools, what they mean in terms of actual contamination and how they threaten the health of young children especially every day, while their parents suppose them to be safe and taken care of.

Heinz Kropiunik, an Austrian engineer, explained how wrong it is for governments to adopt the ‘just leave the asbestos undisturbed and it’ll be fine’ line. Essentially, asbestos is only rarely ‘undisturbed’ and it ignores a danger that only becomes worse (more friable) with age. He made a very good case of why ‘leaving asbestos be’ amounts to sticking one’s head in the sand – and leaving the population to suffer the risks of such a policy.

At the end of the day, the general feeling in the conference room was one of urgency: urgency for the need of uniform European policy, rules, regulations and control, to widely share knowledge on asbestos dangers and to prevent countries from exporting their asbestos waste to third world countries.

Much of the day passed in a fairly sedate tone, but how everybody cheered when one wonderful lady of the Clydebank Asbestos Group told the conference that she felt asbestos criminals should be locked up and the key thrown away. Big applause!

The second day of the conference was focused on increasing awareness of the dangers of asbestos exposure by different methods, such as increasing public awareness, developing prevention strategies, follow-up of risk groups, removing asbestos from buildings and the environment, etc. Well-known speakers included Annie Thebaud- Mony (France), Marc Hindry (France) and Jason Addy (U.K.). Also, attention was given to the consequences of asbestos exposure and therapy possibilities by Hans-Joachim Woitowitz, Alenka Franko (Slovenia) and Helen Clayson (England), to name a few of the speakers. The conference ended with a discussion on future cooperation between Eric Jonckheere, Pierre Pluta (president of the Belgian asbestos victims organization ABEVA) and Rolf Gehring (EFBH). Sadly, due to personal circumstances I was unable to attend this day, which I very much regret.

In the late afternoon, the Committee of Employment and Social Affairs of the European Union held a hearing on asbestos related health dangers in the workplace and the wish to abolish all existing forms of asbestos. I regret missing that even more! Perhaps I may be able to fill you all in on what happened there, later.