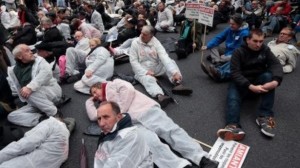 On Saturday 12th of October, 2013, thousands of protesters demonstrated in Paris, France, against the failure of the French authorities to make workplaces asbestos-free.

Coming from all over France, they marched together from the Montparnasse Tower, known for its repeated findings of asbestos dust exceeding allowable levels, to the Sorbonne University. Many widows headed the march, holding up photos of their husbands and loved ones. Placards reminded that asbestos crimes often go unpunished. At the Sorbonne University, the protesters staged a dramatic ‘die-in’, lying down on the street to symbolize the three thousand asbestos victims who die each year in France. 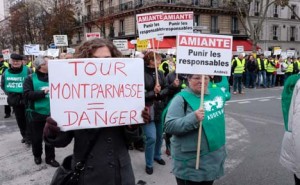 The National Association of Victims of Asbestos (ANDEVA), organising the protest march, stated that its purpose was to raise both public and political awareness that asbestos crimes continue to go unpunished. ANDEVA Vice-President Francois Desriaux: “It has been seventeen years since we submitted the first complaints, and there has still not been a criminal trial.” He pointed out that asbestos risks are still very much a present risk, not a matter of the past. Referring to the Montparnasse Tower, workplace of some five thousand employees, he said: “The Tour Montparnasse should have been ridden of its asbestos years ago, but between owners going round the rules and lax police who have looked the other way and allowed the work to be postponed, they are continuing to play with people’s lives.”

A year ago today, Linda Reinstein, Richard Lemen and I joined this march aimed at raising asbestos awareness. We were proud to do so. Viva ANDEVA!