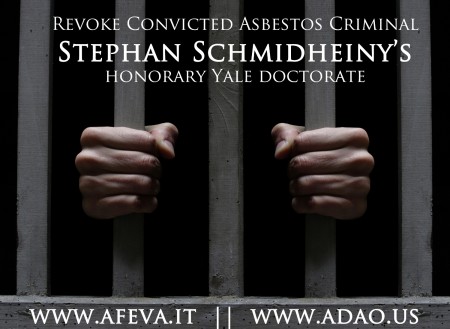 Yale University awarded billionaire Schmidheiny an honorary Doctorate of Humane Letters in 1996, ten years after the Eternit plant in Casale was closed, leaving behind an environment disaster.  The Italian court noted that Schmidheiny’s actual knowledge of the deadly hazards of asbestos dated back at least as far as 1976 when he attended an Eternit managers conference and was involved in key decision-making about the company’s asbestos business.

Yale University asserted in the October 30, 2013 letter that neither Schmidheiny, Eternit nor Schmidheiny’s Avina Foundation ever contributed gifts or grants to Yale.  Wrong!  In an interesting twist, however, investigators working with the legal counsel for the Italian victims located Yale News Releases from 1996 and 1997 indicating that the Avina Foundation provided “major project support” for a Yale conference on U.S. environmental policy and for a Yale publication on the environment.  The form and extent of such “major project support” is, as yet, unknown, but additional inquiries have been made by AFEVA’s legal counsel to Yale University in pursuit of more information about Avina’s involvement.

Yale University has not responded to the Italian asbestos victims’ plea for more information about the honorary degree awarded to Eternit Company asbestos magnate, Stephan Schmidheiny, in 1996.  Yale Vice-President and Secretary has reiterated its refusal to review the Schmidheiny matter.

ADAO would like to recognize and thank Mr. Christopher Meisenkothen for representing AFEVA and bringing their voice and action to the USA.