Thursday 10 and Friday 11 July were 2 terrible days for me – my body came down with infection, pain and fatigue.   I was due to fly up to Canberra, Australian Capital Territory (ACT) Sunday 13 July.  I slowly came good Sat and by midday Sunday apart from the extreme fatigue I felt okay and was determined to get on that plane for Canberra where I was to speak on Monday 14 July at Parliament House, Canberra to the politicians. 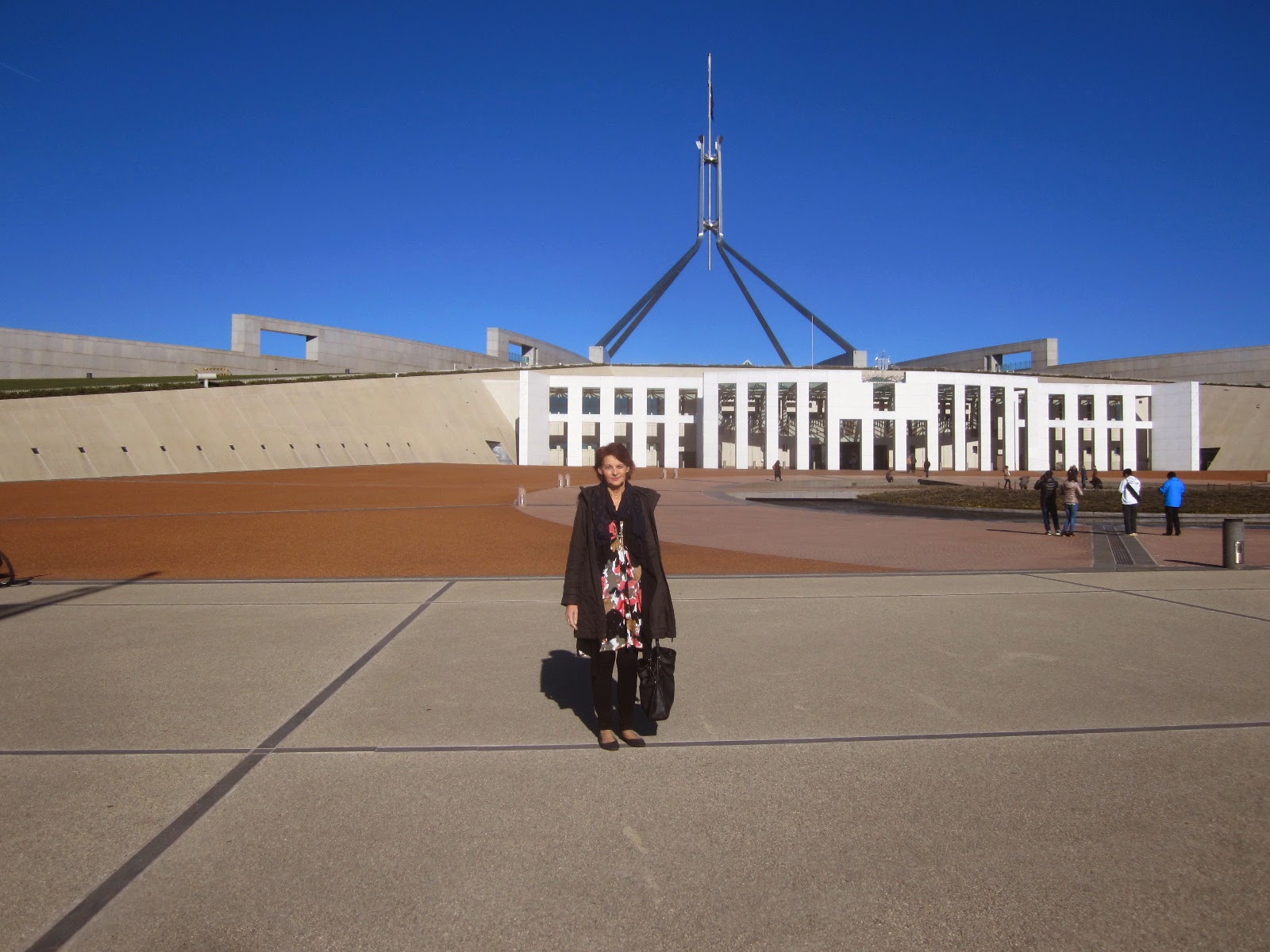 Luckily a special and dear girlfriend Vicki and husband were able to pick me up from the airport and I stayed the night with them in Canberra and was thoroughly spoilt and pampered.  By Monday morning I was ready for Parliament House although a bad back pain was annoying me so I took a morphine based tablet and slowly is went to the background of my health and determination!  Vicki kindly drove me to Parliament House and came inside with me until I was met by Geraldine – Senator Lisa Singh’s aide/personal assistant.  Geraldine and Lisa kindly offered me the use of their office for day to rest and recuperate if I needed to do so.  I met with Lisa for a while and we discussed the global ban on asbestos and asbestos in Australia.   Lisa’s portfolio is a huge one and I am not sure where she gets her energy to carry on/embrace everything as she does so efficiently.
We made our way to the parliamentary luncheon just prior to midday where Peter Tighe (head of ASEA Asbestos Safety and Eradication Agency) was waiting for me along with others that he introduced me to including various politicians.
Members of support groups were invited as well.  Bri Heseltine who heads the group for Mr Fluffy in Canberra was also invited – it was great to make pers

onal contact after being facebook friends with her and to let Bri know what an inspiration that she is with taking on this huge task.
Senator Lisa Singh spoke, as did Peter Tighe then it was my turn.   Russell Broadbent MP also did the closing speech after mine.
(My speech below)
I’d like to begin by thanking the Parliamentary Group on Asbestos Related Diseases for organising this event and for raising awareness about this very important issue.   I’d also like to thank the Asbestos Safety and Eradication Agency for supporting this event and helping PGARD raise awareness about the dangers of asbestos.  I lost my father to pleural mesothelioma in 1985 – he was only 54 years old.   Like many people in our community, I was diagnosed with peritoneal mesothelioma, an asbestos-caused cancer in 2003. I never knew my fate would follow my father’s footsteps.  As I began to heal from surgeries and chemotherapy, mesothelioma spread to the pleura of my lungs in 2009.  I only know to fight – and fight hard – I am currently having further ch

Senator Lisa Singh and me

emotherapy treatment.   Asbestos has had a hugely destructive impact on my family and me.
My story is only one of thousands of stories out there where families have suffered and have been torn apart by this insidious substance.  My pain and knowledge, has spurred me on to advocate for the sufferers of asbestos related diseases and their families and for greater awareness of the dangers of asbestos and prevent people from being exposed in the future.   I attended the initial Asbestos Summit in Sydney in November 2012 where Bill Shorten announced that an independent Agency would be established to target this issue.
In my mind this was the ultimate and very important step in asbestos safety and eradication for Australia and also leading the way worldwide.     I was so overjoyed that this had finally come into fruition through the work of support groups, unions and government.   I felt at peace, that if I died tomorrow I would be happy in the knowledge that this is in place.  As my mesothelioma battle continues, so do my advocacy efforts.  In April 2014, I was fortunate to attend the Asbestos Disease Awareness Organisation (ADAO) 10th International Asbestos Awareness Conference in Washington where I was honoured to receive an award for advocacy and support to other sufferers and their families. As a guest speaker, I shared my story.   Asbestos Safety and Eradication Council Chairman Geoff Fary was invited to also speak at the ADAO conference in 2013. He spoke about As

bestos Management Review, the new agency and the way forward, and people listened.  It was clear to me, that America and other countries see us as leaders in our country and abroad in campaigns to ban asbestos.  We have come a long way since the full ban on Asbestos in 2003, and most importantly, with the establishment of the independent Agency.  Mesothelioma is a death sentence for the person diagnosed and their family.  A
sbestos tumours are likened to barb wire and eventually join up into like a mass of hard concrete in the linings and suffocate the organs making breathing painful.  It literally takes your breath away.
Australians need this Agency to ensure there is a national approach to identifying asbestos and developing ways to remove it from our community.  I have a great fear that without the Agency, the issue of eradicating asbestos will be put on the backburner and will fizzle out.  Please hear my voice. I would not wish this painful and aggressive cancer on anyone.  Those nearly invisible fibres have devastated my family, my friends, my community, and me.   My father paid a high price for his work – his life. Now I fight this painful, but preventable cancer.  Do we want asbestos to continue to plague us and the next generation?   For me, for us, please keep the Asbestos Safety and Eradication Agency viable – prevention is the only cure.   I thank you again for inviting me here today.Standing on the steps of to the entrance of Parliament House prior to the PGARDS luncheon.At PGARDS luncheon with team members of ADFA (Asbestos Diseases Foundation of Australia), Kat Burge South Australia and Senator Lisa Singh.
Lou with Senator Lisa Singh.

It was a highlight of my journey with mesothelioma to be able to stand up for myself and everyone living with an asbestos related disease plus those who have lost their lives to this deadly disease.  I was truly honoured to have been asked to speak and even though illness at the time nearly stopped me from attending – I was determined to be there!  To be a voice to be heard!
Lou Williams, GBAN Australian National Director
This entry was posted in Blog. Bookmark the permalink.