On Friday 4th July 2014, I was invited by the Greater Manchester Asbestos Victims Support Group to give a speech about the story of Casale Monferrato in the town hall of Manchester.  It was an honor to share my story on behalf of my family and Associazione Familiari Vittime Amianto (AFeVA) from Casale where more than 200 asbestos victims, activists, and lawmakers gathered for Action Mesothelioma Day. 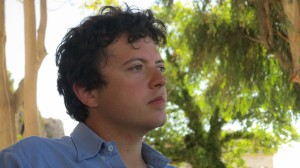 “My name is Alessandro, I’m a filmmaker and I come from Casale Monferrato in Italy . In many ways, my story is not very different from yours.

Casale is a beautiful town surrounded by vineyards and gentle hills. It is a deeply human landscape that has been lovingly taken care of for centuries. A Tolkien landscape really, a sort of shire where you would expect hobbits to live.

Yet… When I was a child, I was told that the air we breathed was toxic… My parents said that it was due to a factory with an odd name: “Eternit”. But our particular “Mordor” was not all fire and smoke. It had been abandoned. It remained there, empty, huge and grey.. Most of its windows were broken and it was full of dust. Tons and tons of asbestos had been left behind… When the wind was blowing the deadly dust flew and spread over the trees and the grass and the houses. I remember that when we drove by on our bikes, I held my breath. Me and all the other children as well… But the dust was everywhere: on the roofs, in the courtyards, on the vegetables and the grapes, on the chicken pens, on every inch of our lovely fields

My stepfather died of mesothelioma in 2000. It had caused three long years of suffering, for him, for my mother, and for all the family. I was a teenager. After that I tried to ignore the tragedy and forget everything down to the very words “mesothelioma”, “Eternit”, “asbestos”… I left Casale as soon as I could – I was 18, but the truth is the idea of dying of mesothelioma remains within me…. I know I potentially belong to the casualty statistics. I am just number, in my hometown, we all are: out of a population of 36.000, 2000 people have already died of mesothelioma; every week someone discovers he or she is ill; every week someone dies.

For a long time, I managed to ignore all that. Then in 2011, something changed. I was invited by a fellow filmmaker to watch a film about the Eternit trial… I was reluctant and skeptical… Why dwell on pain? Why not busy ourselves with life instead of death? As I sat in the theatre and watched the faces of the people who had been involved in the trial, I realized that the pain I felt was not only mine and that it belonged instead to a whole community. And as a community, we were victims but we had chosen to fight back. I felt proud. I felt proud that the simple people of Casale, the factory workers of Eternit and their families relentlessly struggled to obtain a criminal trial against the former owners of Eternit company. Not only against the local ones but also against the all powerful CEOs of the multinational of asbestos-cement.

If you come to Casale you cannot avoid seing the Italian flags on the windows. On the flags, you can read: “Eternit giustizia”! Eternit justice. After 3 years of trial, Stephan Schmidheiny, the former owner of Eternit group has been convicted to 18 years of jail in 2013 by the Court of Appeal of Turin: he has been found guilty of environmental disaster. This may not have an economic impact on the victims families lives because no compensation has been paid, but the symbolic impact is huge: yes, someone is responsible for our suffering, it wasn’t just bad luck, it wasn’t fate. It had been a crime…

Newspapers from SouthAmerica, Europe and Asia reported this landmark victory: the sufferance of so many was being acknowledged and the raising awareness on asbestos issue meant an increasing number of new victims might be avoided in the future.

The final verdict is expected in December: the Court of Cassation should confirm the verdict. We hope they would but in the meantime another criminal trial against Eternit is being prepared: Stephan Schmidheiny is now sued for mass murder. The same public prosecutor of the first Eternit case believes he is guilty of the intentional murder of two hundreds people who died of mesothelioma in the past four years: none of those  had ever worked in the factory.

I know that many of you are victims of the same tragedy, many of you have experienced the loss of dear ones. UK is no different from Italy when it comes to the reckless use of this eternal and deadly construction material and mesothelioma makes no differences amongst nationalities or social classes. That is why we must fight together. So that others are saved. So that new generations are preserved.

We may never be able to receive a compensation to relieve some of the burden caused by the sickness but I have become convinced that the claim for justice is even more important. In Casale there were 6000 civil claimants suing Eternit in the criminal trial. For three years every Monday 6 buses full of people left Casale to go to the courtroom. It was important to be there, together, fighting back and demanding the truth.

I want to thank the Greater Manchester Victims group for inviting me here and you all for listening to me. The only reason I am here is because I hope my words will be able to carry a message of hope and solidarity… In Casale the idea to sue the owner of Eternit seemed impossibly ambitious but we did… As I said our story is not different from yours: please believe the impossible can be achieved and we can do it together.

Today, I am looking forward to learning from your experience and your stories.