BRAZIL: Asbestos Added to the National List of Carcinogenic Agents for Human Beings 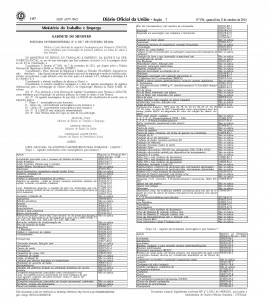 I am pleased to share the publication from the Ministerial Decree No. 9 of 2014, the Brazilian Ministry of Labor, Social Security, and Health, establishing a National List of Carcinogenic Agents for Human Beings (LINACH), based on the International Agency for Research on Cancer (IARC) classification of groups.

Among the agents confirmed as human carcinogens, include asbestos, in all its forms including chrysotile asbestos and minerals such as talc or vermiculite containing asbestos in its composition.

Undoubtedly listing chrysotile asbestos on the National List of Carcinogenic Agents for Human Beings confirms that all forms of asbestos can cause cancer.

This is extremely important, as Brazil is the 3rd largest producer of asbestos. In 2013, 100% of the asbestos the USA imported came from Brazil.