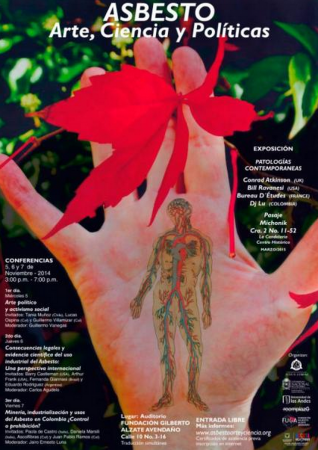 “A conference was held in Bogota called “Art, Science, and Politics” on November 5-7.  Prior to this event, there were some reports in the local newspaper, El Tiempo.

The spokesman for the asbestos industry (Ascolfibras), a businessman with a medical education, assured readers in one of these newspaper reports that, “The type of asbestos used in Colombia is regulated and is safe.”  This man was invited to the conference, but neither he nor anyone else from the industry came to address the meeting (he may have sent observers).  A response to his claims in the newspaper was prepared for the editor, co-signed by doctors in Colombia and foreign participants.

Colombian asbestos use has risen steeply from 2008-2012 to 26,000 m.t./yr, with imports mainly from Brazil and Russia.  The chrysotile asbestos mine in Colombia reopened after the cessation of Canadian asbestos exports in 2011.  Canadian asbestos regulations contain vague language about industry doing what is “possible”; asbestos-cement waste is categorized as ordinary waste.  Colombia adopted ILO Convention 162 on asbestos in 1998.  Whether there has been any enforcement action by the government is unclear.

Colombian conference speakers included a prominent unionist who said asbestos should be banned and Prof. Juan Pablo Ramos Bonilla of University of the Andes.  Juan Pablo Ramos Bonilla reported that there was no information publicly available on conditions in the country’s asbestos industry or the results of any medical surveys.  His group had done sampling in shops where mechanics did brake and clutch work and found significant exposures, often above the exposure limit of 0.1 f/cc.  Some of his work has been published and the rest will be.

The conference was organized by artist Guillermo Villamizar, who spoke of the influence of rich collectors such as Stephan Schmidheiny on the art world.

Foreign speakers included Fernanda Giannasi (Br.), Arthur Frank (US), Eduardo Rodriguez (Arg.), Paola de Castro (It.), Tania Munoz (Chile), and me.  The last three of these speakers shared experiences from banning asbestos in their countries.  Fernanda shared her experiences and observations on building a social movement on the asbestos issue.  Additional meetings were held with interested medical educators and government officials.  There was some media interest, and most of the proceedings were recorded.  Doctors, students, and others in attendance at the conference gave reason for optimism that a new campaign to ban asbestos in Colombia has started.  Paola de Castro suggested that establishing a new asbestos list in Spanish would be helpful in supporting campaigns in Latin America.

Some of the other participants may post pictures taken last week in Colombia.” 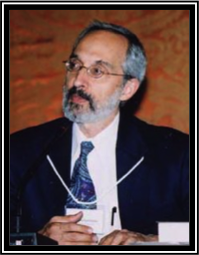 Dr. Barry Castleman, ScD is an Environmental Consultant trained in chemical and environmental engineering. He holds a Doctor of Science degree from the Johns Hopkins School of Public Health. He has been a consultant to numerous agencies of the US government and other governments, international bodies, and environmental groups dealing with a wide range of public health issues. He has testified as an expert in civil litigation in the US on the history of asbestos as a public health problem and the reasons for failure to properly control asbestos hazards. Dr. Castleman has spent the past 40 years working on asbestos as a public health problem.  Dr. Castleman is a member of the ADAO Science Advisory Board.