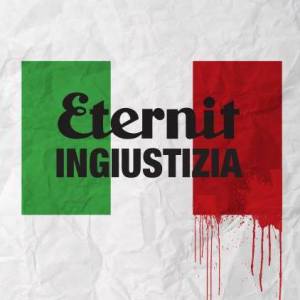 We express our strongest indignation and disagreement for the shameful and unfair verdict of the Court of Cassation issued on the 19th of November 2014. Schmidheiny, the CEO and co-owner of Eternit Italy had been sentenced to 18 years in prison for permanent wilful disaster. In the Court of Cassation the Swiss billionaire was not acquitted, it was the crime that fell under the statute of limitations: in fact both Chief Public Prosecutor, and even his lawyer described him as guilty.

It is a monstrosity and an outrage to apply the statute of limitation to a crime which has already caused 3,000 deaths, is still killing and still will, and that in Casale alone murder a person a week: today as we write these words Schmidheiny’s disaster has killed another victim.

This verdict violates the fundamental principles of International Conventions on Human Rights: the legal guarantees of the defendants must in no way not cancel the rights of the thousands of victims of the crime. The verdict says that personal responsibility for corporate crime can be annulled by arbitrary legal technicalities.

Our struggle continues: we shall pursue all the legal avenues and social mobilization throughout the world, including any case against Eternit, such as the case against Schmidheiny for murder soon to be heard in Turin. The international coordination, convened in Casale on November the 21st, 2014, voices its solidarity with the victims, to their relatives the world throughout and in Casale.

This shameful verdict will not stop us.

This entry was posted in Blog, Countries. Bookmark the permalink.