This book contains the proceedings from the “International Day of Asbestos Victims” symposium organized by French National Association for the Defense of Asbestos Victims (ANDEVA) which was held in Paris on October, 12 2012.  This two-part book includes presentations from “State of Science” and  “State of the World. For more information about ANDEVA visit http://www.andeva.fr.

State of Science — State of the World 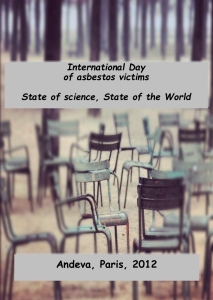 “The  proceedings of  the symposium «international day of asbestos victims» organised  in Paris, 12th October 2012 by the French National Association for the Defense of Asbestos Victims — ANDEVA — are built in two parts.

The first part  « state of science » includes texts on the history and state of epidemiology of asbestos diseases by R. Lemen,  on the epidemiology of asbestos-related diseases in Italy   by E. Merler, in Québec, Canada,  by F. Turcotte and in Brazil   by H. Castro, followed by texts on medicine and fundamental research by A. Scherpereel, P-G. Betta and M-C. Jaurand.

The second part «state of the world»displays a global panorama of the  situation with respect to the use and exposure to asbestos, the different legislations, situation and compensation of victims, struggles and actions for public health:

economic and geographical data about asbestos trade (L. Kazan-Allen), the historical responsibility of Canada (P. Martin and K. Ruff), the situation in United States (L. Reinstein), the two judgements with international repercussions on banning asbestos, that is, the cancellation in 1991 of the EPA regulations in United States (L. Kazan-Allen) and the rejection of the complaint of Canada to WTO against France in 2000 (M. Parigot), the contrasting situations of India (M. Gupta), Japan and Korea, with an overview of the tragic situation in Asia, notably in China (S. Furuya and Y. Choi), also in Brazil (F. Giannasi) and Australia (L. Singh), the issue of compensation is described in the context of South Africa (T. da Cruz), France (M-J. Voisin) and the Netherlands  (T. de Bruin), the current European situations in Belgium (E. Jonckheere), Germany (G. Albracht) and Albany (R. Hanxari), finally the global impact of the Eternit trial in Italy (B. Pesce) and an overview of the general situation in France and throughout the world (M. Hindry and P. Pluta).

This book has  a double purpose: to increase diffusion of scientific knowledge and to develop an international public health movement; it should  help to provide better awareness of the risks and damages due to asbestos and stimulate better public health policies to fight this plague at regional, national, European and worldwide level.”