NOTE: It was exciting to see the Global Ban Asbestos Network (GBAN), a non-profit and independent initiative, help Paul Palmer connect with the Indonesian GBAN Member, Darisman, for their Asbestos Health Awareness Campaign. GBAN was founded in 2010 by the Asbestos Disease Awareness Organization (ADAO) and the Brazilian Association of the Asbestos-Exposed (ABREA).  It is so inspiring to see students spreading asbestos awareness around the globe. ~ Linda

NOTE: It was exciting to see the Global Ban Asbestos Network (GBAN), a non-profit and independent initiative, help Paul Palmer connect with the Indonesian GBAN Member, Darisman, for their Asbestos Health Awareness Campaign. GBAN was founded in 2010 by the Asbestos Disease Awareness Organization (ADAO) and the Brazilian Association of the Asbestos-Exposed (ABREA).

The Asbestos Disease Awareness Organization was pleased to donate funds and supply educational materials for this important campaign.  It is so inspiring to see students spreading asbestos awareness around the globe. ~ Linda 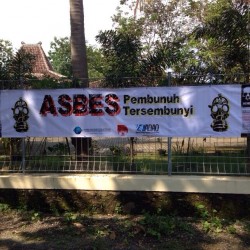 On Sunday 21st December 2014, a group of students on a community development program from Gadjah Mada University in Yogyakarta, Indonesia, held an asbestos health awareness campaign at their community health day event at Sendangrejo Village, Sleman, Yogyakarta. Sam Anthonysz and Paul Palmer, development students from Australia, organized the campaign. Sam and Paul were recently on a two-month development field placement in central Java, Indonesia as part of their in-country development studies immersion program. Soon after beginning their field placement in the Sendangrejo district, it quickly became apparent to both students that harmful asbestos cement sheeting was a commonly used building material, found in the construction of most houses, shops and village halls. Following an initial survey of village leaders throughout the region, it was clear that there was almost zero knowledge surrounding the fatal health ramifications of working with and using asbestos cement sheeting. It was at this point that both students could see the benefits in holding an educational asbestos awareness campaign, with the objective of raising awareness on this most important of issues plaguing many nations in South East Asia, including Indonesia.

Asbestos cement sheeting is still widely used and manufactured across Indonesia today. Most people, especially in rural areas, have very little knowledge on the hazards of using and working with materials containing asbestos. As we know, asbestos fibers, when inhaled, cause serious lung disease such as asbestosis, mesothelioma, and lung cancer. Smokers are 60 times more likely to contract an asbestos related disease through exposure to harmful asbestos fibers than non-smokers, this is particularly prevalent when considering the very high smoking rates throughout Indonesia. This environment, coupled with a void in knowledge surrounding the hazards of asbestos, equate to potentially high rates of Indonesian people contracting asbestos related diseases in the coming decades. 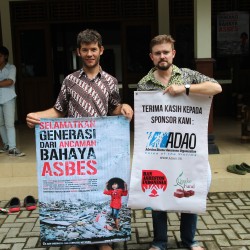 The district head of Sendangrejo, known within Indonesia as the Kepala Desa, knew nothing of the health risks associated with asbestos and so was eager to pledge her support by formally inviting the village leaders and medical representatives from the surrounding sixteen villages. A Program Coordinator from the Indonesian Ban Asbestos Network (Ina-Ban), Dimu Pratama, agreed to travel from Bandung, West Java to present at the event. In addition to local villagers, medical students from the nearby Gadjah Mada University in Yogyakarta were also invited. It was thought that raising awareness among future Indonesian medical practitioners would promote an increase in asbestos related disease discourse within Indonesia at a time when very little exists.

In the lead-up to the event Sam and Paul printed many large eye-catching awareness banners, designed by Ina-Ban’s own Ajat Sudrajat, which were posted throughout the region to raise awareness and promote the event. On the day of the seminar event, informative asbestos awareness posters were placed strategically in the presentation room and brochures, containing information on asbestos related diseases, were given to all attendees. The event was a success, with Ina-Ban staging an impressive presentation suitable for the audience in attendance. Many local villagers attended the event in addition to village leaders and medical students. When the floor was thrown open for questions, some of the most unlikely attendees were seen quizzing the speaker, including a local mother of two and an elderly man from one of the surrounding villages. Following the event, many of the large banners and posters were distributed into the surrounding villages and would act as an informative reminder to local people as to the hazards of using or working with materials containing asbestos. 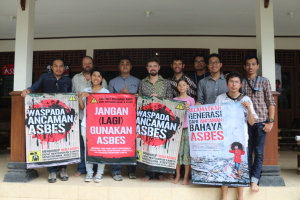 This asbestos health awareness campaign was supported byIndonesian Ban Asbestos Network (Ina-Ban),Asbestos Disease Awareness Organization (ADAO), Humanitarian Benchmark, a Yogyakarta based Australian organization supporting the banning of asbestos in Indonesia and the Quake Fund, a small informal fund setup to bridge the gap between individuals and families wanting to help disaster affected areas. All activities were initiated and organized by Sam Anthonysz, from Flinders University, South Australia, Adelaide, and Paul Palmer, from Murdoch University, Western Australia, Perth, with support from other Indonesian students in their community development group from Gadjah Mada University in Yogyakarta, Indonesia.