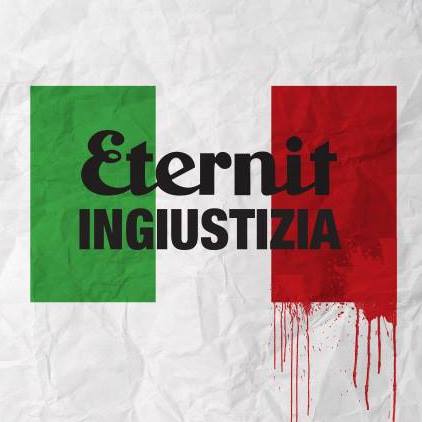 A coach will be leaving Casale – Tuesday May the 12th, 7 am – Piazze delle medaglie d’oro, near the entrance to the Martiri Schools. If you haven’t booked, contact AFeVA CGIL-CISL UIL.

Our lawyers will be there as they have been for decades, pro bono, demanding for damages and as partie civile of the victims included in the Prosecution’s list. On the first hearing AFeVA, the Trade Unions and the Local Authorities will also petition the court to be accepted as party (partie civile) in the case.

We would like to recall that at the Rome meetings following the shameful verdict of the Court of Cassation, Prime Minister Renzi promised   the government would also join the case as a party and seek damages and redress. We have been asking the State to play an active role and too coordinate all the parties (parties civiles) so as to take all the possible actions and have justice, first and foremost for the victims, and obtain damages both in the civil and criminal courts.

The fight goes on to obtain justice while the incredible disaster continues. We want a complete decontamination of the area! We want to defeat mesotheliomas!

[1] The preliminary hearing with the Giudice dell’udienza preliminare or GUP (Preliminary Hearing Judge) may have one of three outcomes: the judge may decide to indict the defendants (and accept all cases, or alternatively only some), or deny the Prosecution’s request. If the GUP decides to allow the case to go to court, then the court also decides whether the defendants should answer a murder or a manslaughter charge (concerning all the 258 deaths). If the accusation were to be manslaughter then a number of cases would be under the statute of limitations There maybe more than one preliminary hearing and other hearings maybe held after a week or so. The preliminary jearings are not open to the public.”

This entry was posted in Blog and tagged asbestos, eternit, mesothelioma. Bookmark the permalink.