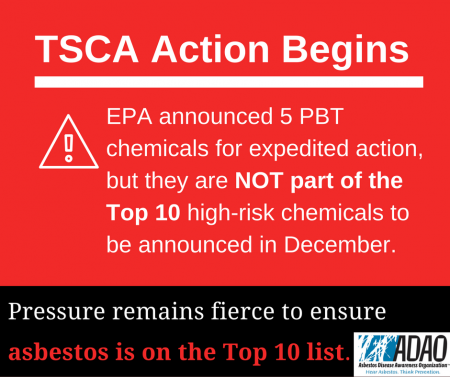 I want to clarify some confusing news you may have seen this week about asbestos and the Toxic Substances Control Act (TSCA). The US Environmental Protection Agency (EPA) announced five persistent, bioaccumulative and toxic (PBT) chemicals from the EPA’s 2014 Workplan list for expedited review under the new TSCA Section 6 (h).

For many, the EPA’s press release was misleading and confusing, especially the headline, “EPA Acts on New Chemical Law to Fast-Track Five Chemicals.” At first, this sounded as though EPA had announced the first half of their Top 10 high-risk chemicals list for priority review under TSCA, but the Agency sent out a clarifying statement soon after the release went out:

“Under the new law, EPA must publish a list of 10 chemicals for risk evaluations within 180 days of enactment. The announcement regarding PBT chemicals is not related to those first 10 chemicals. We are still targeting December, 2016 to announce what these 10 chemicals will be. There is a separate provision in TSCA – section 6(h) – that identified persistent, bioaccumulative, and toxic (PBT) chemicals that are subject to expedited action.”

I personally reached out to EPA Assistant Administrator Jim Jones to ensure asbestos wasn’t being neglected as the agency plans for evaluations, and he assured me that asbestos is still a candidate for one of the Top 10 high-risk chemicals for the first evaluation.

The EPA has done an incredible job increasing transparency and many of your questions can be answered at EPA’s “The Frank R. Lautenberg Chemical Safety for the 21st Century Act: Frequent Questions” page.

Although asbestos remains the poster child for the U.S.’s failed toxic safety laws, and there is an overwhelming consensus from the public health and environmental organizations, trade unions, and lawmakers that asbestos belongs at the very top of this Top 10 high-risk chemicals list.

It’s up to us, ADAO family, to keep the pressure high on the EPA to ensure they take the opportunity presented by newly reformed TSCA to finally and fully ban asbestos. The EPA may think it’s okay to keep asbestos victims waiting, but we know the human cost of inaction. We cannot afford to wait another year, another month, another day.

We’ve asked a lot of ADAO supporters in recent months, but this is our moment. Please keep the intensity high — continue using your social channels to reach out to the EPA and keep an eye out for any other campaigns ADAO might launch between now and December. You can also call your U.S. Senators and urge them to support Sen. Boxer’s Alan Reinstein Ban Asbestos Now Act of 2016, which would put even more pressure on the EPA to act on asbestos.

When we band together, we know our voices are loud enough to reach all the way to the Oval Office — let’s keep the pressure and the volume high and make sure EPA knows there’s only one acceptable option when it comes to asbestos: Top 10 and a swift ban.

Together, we will MAKE change happen.