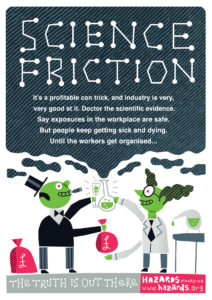 There’s quite a few cautionary lessons [regarding the Rob Moore asbestos spy case], some of which I didn’t anticipate. These were reinforced by the recent Voiceless Victims spying revelations, where many of the same people were targeted over their safety and labour rights activities.

The basic lessons are:

This entry was posted in Blog, Uncategorized. Bookmark the permalink.