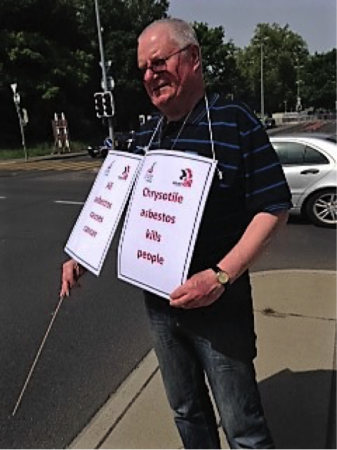 In 1963, in London, a famous trial took place at the ‘Old Bailey’ court, where a Dr. Stephen Ward was charged with living off immoral earnings.

One of the witnesses was Mandy Rice Davies, and during cross-examination she famously said, when asked about the evidence given by another witness, “Well he would [say that] wouldn’t he”.

I thought of this when I came across two asbestos news items recently.

The first one was from the ‘International Trade Unions Movement for Chrysotile’. This was in support of a study conducted by Spanish scientists into the asbestos content of lung tissue undertaken in Spain.. This study, The First Indication of Pulmonary Asbestos Fibres in a Spanish Population was published in the August 2017 edition of’ LUNG’.

The findings of the study allege that chrysotile asbestos is NOT a cause of disease. It suggests that chrysotile fibres, when entering the lungs, are freely eliminated without any negative effects. It also goes on to say that there is no association between chrysotile and the risk of lung diseases.

The so called trade union movement  then say that the Spanish study is consistent with another study by well known British scientists who conducted a trial in 2016, ‘Pleural mesothelioma and lung cancer risks in relation to occupational history and asbestos lung burden’ published in ‘Occupational & Environmental Medicine. This study, according to the chrysotile unions alleges that very few, if any, chrysotile fibres where found in lung samples tested.

The second news item to reach me was about the ‘International Chrysotile Association’ (ICA) attacking the Canadian government decision to ban asbestos. The ICA has gone to the trouble of producing a 30 page booklet on how wrong the government is in taking the decision it took to ban asbestos and again going to great length about how safe chrysotile is.

All of this of course can be shown to be a ‘Magical Mystery Tour’ and every claim can be challenged, and proven, with factual evidence that chrysotile asbestos is dangerous if inhaled, can and does, cause asbestos related diseases including mesothelioma, and that it is right that it should be banned FULL STOP.