Asbestos Experts and Victims Gather in Brazil to Advance Awareness, Prevention, and Implement the Ban 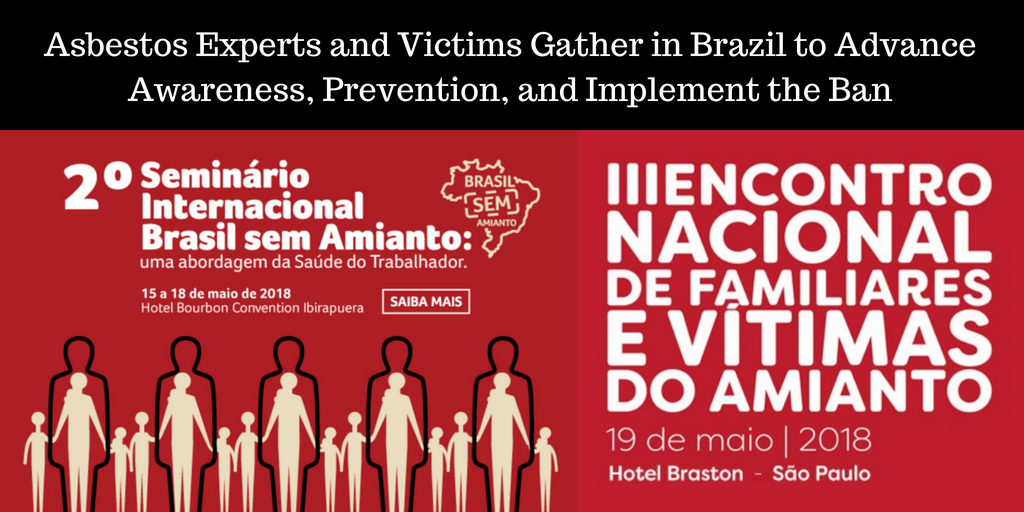 On May 15 – 18, Brazil held the powerful II International Asbestos Seminar. There were four days of incredible information exchanged from around the world. During the nearly twenty sessions, experts from Brazil, Australia, the United Kingdom, Italy, and the United States presented the latest information on early diagnosis, surveillance, justice, social movements, and more. The second annual seminar was organized by Fernanda Giannasi of the Associação Brasileira dos Expostos ao Amianto (ABREA), The Interunion Department on Worker’ Safety And Health (DIESAT), and Marcia Cristina Kamei López Aliaga of the Labor Public Ministry (MPT). It was an honor for the Asbestos Disease Awareness Organization to be included alongside our fellow Americans: Dr. Steven Markowitz (City University of New York/ Mt. Sinai), Dr. Barry Castleman (Environmental Consultant), and Dr. Arthur Frank (Drexel University) in this international conference and a privilege to speak about social activism in the US, and the progress and challenges we have faced to ban asbestos in the United States.

On Saturday, three hundred Brazilian asbestos victims came together for the III National Meeting of Relatives and Victims of Asbestos promoted by ABREA and DIESAT. During this meeting the many sister organizations of ABREA from all across Brazil came together to discuss awareness, prevention, ban implementation, and the newest findings in asbestos-related topics. Led by Fernanda Giannasi, this event was inspirational and informative.  Stay tuned for the ABREA Declaration that can be widely shared to advance global ban asbestos efforts.

Most importantly, Brazil’s Supreme Court decision to ban asbestos is not only a landmark step for Brazil, but for the entire world. ADAO looks forward to working with Brazil on continued efforts to encourage the United States to follow suit, and finally ban asbestos, without loopholes or exemptions.

“The second seminar was very important to Brazil because it followed a historical moment where the Brazilian Supreme Court verdict declared the the Federal Law of Controlled Use of Asbestos unconstitutional. Therefore, now is the time to highlight the damages asbestos causes to the human health in order to raise awareness about asbestos related diseases such as mesothelioma. In my opinion, the major points emphasized in the conference were the need to promote surveillance of the exposed population; the importance of registering asbestos-related diseases properly in order to guide Health System decisions and increase awareness; and finally, the importance of professionals in different subjects working together, towards the same goal in order to provide the highest protection to human health.”  — Marcia Cristina Kamei López Aliaga
“After the approval of the asbestos ban in Brazil last year, ABREA  has faced other essential challenges. One of them being the lack of social visibility of asbestos victims and the absence of a fair compensation to them and their families. The national and international speakers at this conference discussed in depth how to improve the diagnosis of asbestos-related diseases, its registers, public awareness, and the collaboration with government and public or private health agencies. The most important point and message I would like to spread all over the world is the importance of working together in order to combat the silent threat of asbestos – the killer fiber.” — Fernanda Giannasi

This entry was posted in Blog and tagged Brasil, Brasil Sem Amianto, Brazil, Brazilian Association of the Exposed to Asbestos. Bookmark the permalink.