EPA and TSCA Implementation: Without an Asbestos Ban, You Can Put Lipstick on This Pig, But it’s Still a Pig 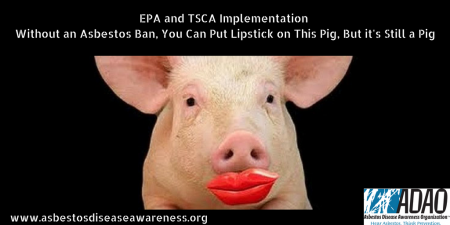 This is an unusual blog for me. During the past fourteen years, I’ve truly done my best to  be a diplomat, but today, I’ve laced up my boxing gloves.

Each year, nearly 40,000 Americans die from asbestos-caused diseases, yet raw asbestos imports and use continue. Enough is enough.

July was a big month for environmental and public health nonprofits throughout the nation, as the embattled EPA Administrator Scott Pruitt finally resigned on July 5. Don’t get too excited though, the new Acting EPA Administrator, Andrew Wheeler, is a former powerhouse coal lobbyist.

1- “THE ASBESTOS, TO JUDGMENT – The approach to the problem of asbestos, in the European Court of Human Rights” by Francisco Báez Baquet

5- “Asbestos in buildings for public use” by Francisco Báez Baquet

6- “The doubt that does not offend: Asbestos and idiopathic pulmonary fibrosis” by Francisco Báez Baquet

9- “Pericardial mesothelioma and exposure to asbestos” by Francisco Báez Baquet

10- “Asbestos and leisure. The hidden side of the mineral poison” by Francisco Báez Baquet 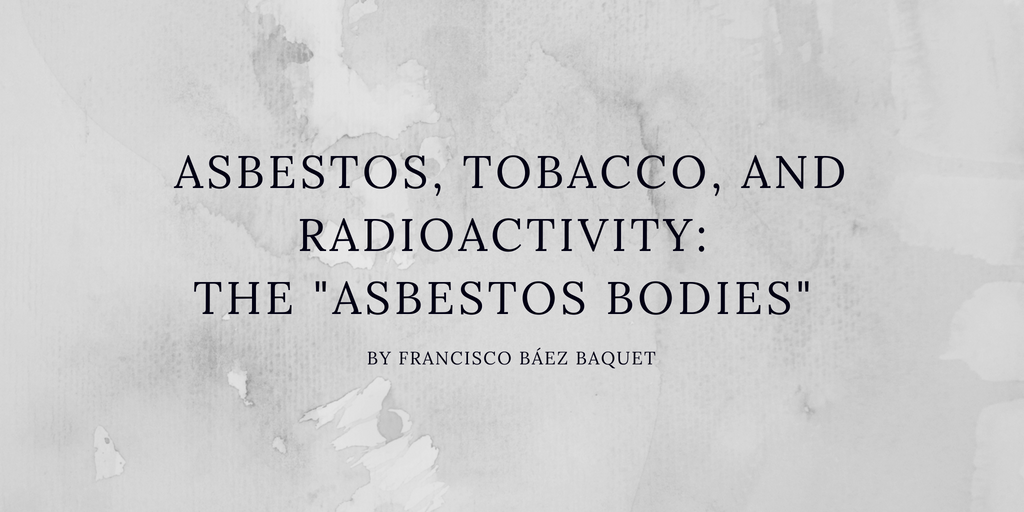 Dedication: I am pleased to dedicate the present work, to the doctors Jaume Ferrer Sancho and Josep Tarrés Olivella, in gratitude for their professional dedication to the study of asbestos-related pathologies.

In 1899, the Dr. Henri Montague Murray, in London, makes the first observation of a death associated with the asbestos, diagnosing autopsy a pulmonary fibrosis in a worker who had worked for fourteen years in the carding workshop of an asbestos spinning, and who had died at thirty-five years of age.

This man was the tenth victim in his area of work (in which mortality was 100%), and in it the Dr. Murray noted the interstitial fibrosis, and some “curious bodies” he had in the lungs, thus being the first in warning about the presence of asbestos bodies.

The so-called “asbestos bodies” or “ferruginous bodies“, were described as such for the first time by Marchand in 1906.

END_OF_DOCUMENT_TOKEN_TO_BE_REPLACED

Asbestos in buildings for public use by Francisco Báez Baquet 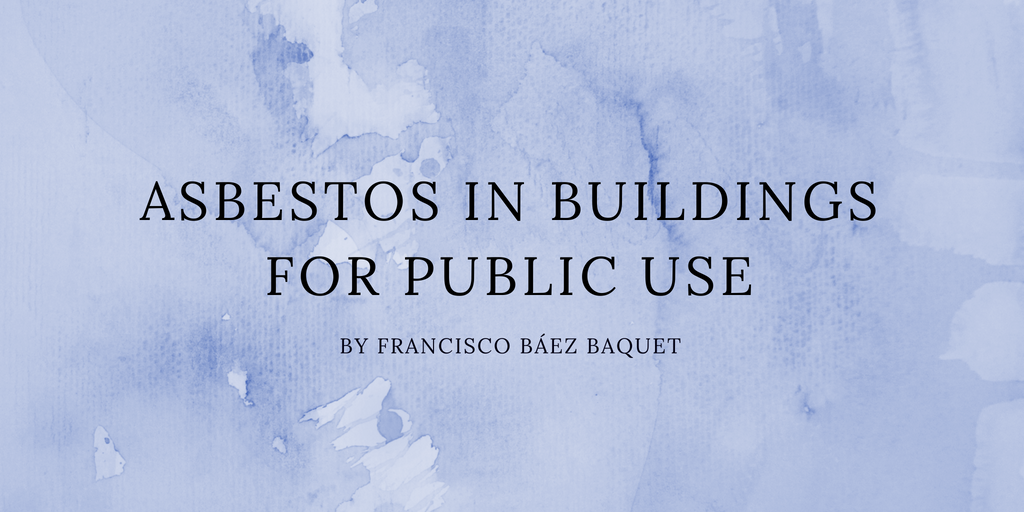 This letter is preferably addressed to those people, institutions or social structures of intermediation, which are in some way concerned with the issue of the presence of asbestos in buildings for public use, with special emphasis on the case of schools, given that the development of diseases caused by exposure to asbestos , usually occur with a significant time lag, counted from when that exposure occurs: it is the long latency time.

That makes to the children, with their longer life expectancy, be especially prone to be able to reached, after the exposure to the pollutant occurred, be reached and of what enough time has elapsed for the incurable and deadly disease to emerge.

END_OF_DOCUMENT_TOKEN_TO_BE_REPLACED 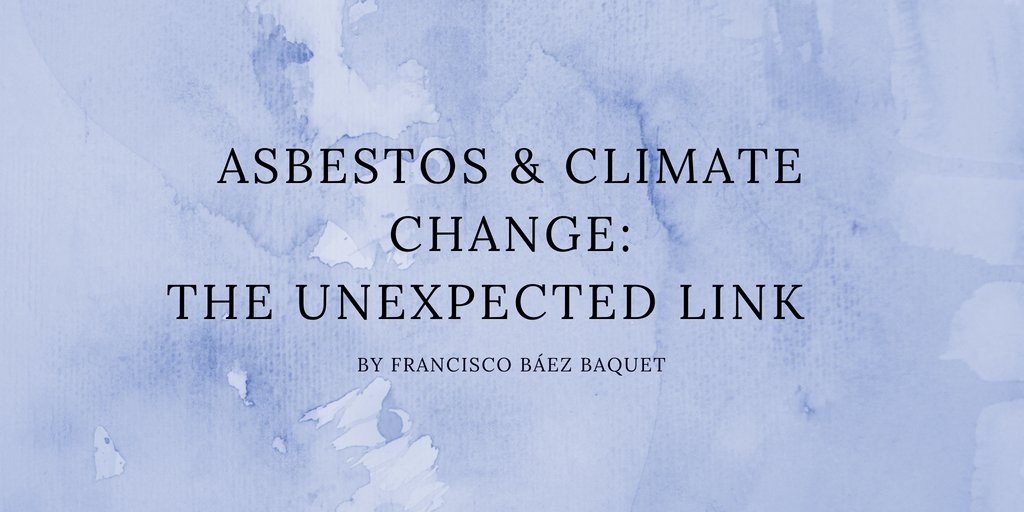 In recent times, the media of my country (Spain) have been lavish in news related to climate change in some way, referring to intense heat waves, alternating with formidable storms, accompanied by all sorts of factors determining the increase in its intensity: torrential rains, strong winds, hail, floods and overflows, etc.

On the occasion of such events, both the pages of newspapers and the screens of our televisions have been invaded, relatively frequently, by images that correspond to the graphic summary of each meteorological event. Among them, those that come to show the devastating effects of the passage of hurricane winds, floods and intense hailstorms.

END_OF_DOCUMENT_TOKEN_TO_BE_REPLACED 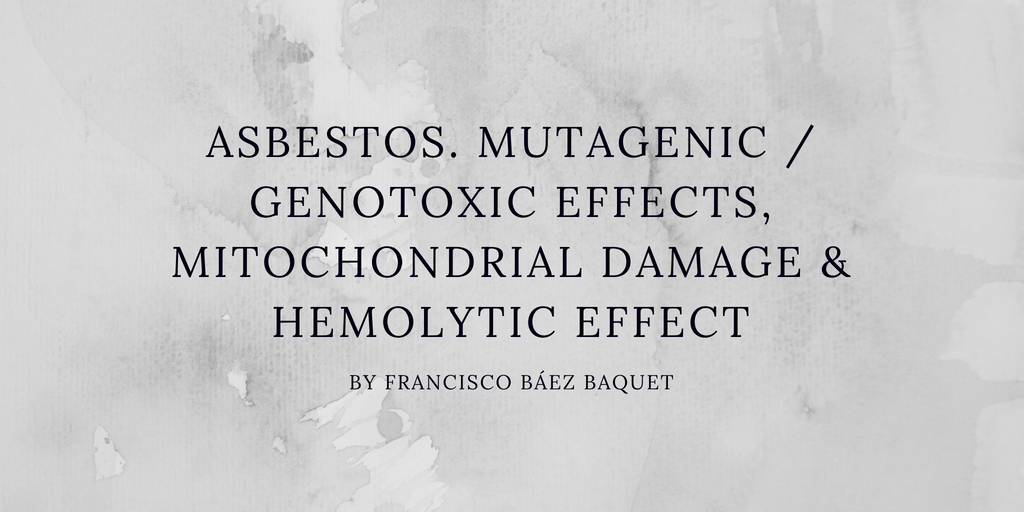 Dedication: I am pleased to dedicate the present work to Dr. Don Alfredo Menéndez Navarro, who, transcending his proven track record as a brilliant historian of occupational medicine, and through his own personal involvement – even before the authorities of the European Union, in company Dr. Don Carlos Piñeiro Díaz, has known and wanted to get involved in the fight for the universal prohibition of asbestos, for the social recognition of the Spanish victims of asbestos, and for that of the rest of the countries, for the registration of the real incidence in our country, of the asbestos-related pathologies, for the fair economic recovery of the damage caused, and for the rejection towards the guilty, for negligence, inaction, and / or deliberate concealment. To both, our personal thanks.

From our personal perception, the investigations into genotoxic effects of asbestos, carried out on cohorts of exposed workers, or of populations also exposed, for reasons of neighborhood, and not merely on in vitro studies (in which contamination is provided), are especially convincing. voluntarily by the experimenter himself), because those others turn out to be, therefore, practically exempt from any possibility of experimental or statistical artifact.

END_OF_DOCUMENT_TOKEN_TO_BE_REPLACED

The doubt that does not offend: Asbestos and idiopathic pulmonary fibrosis by Francisco Báez Baquet 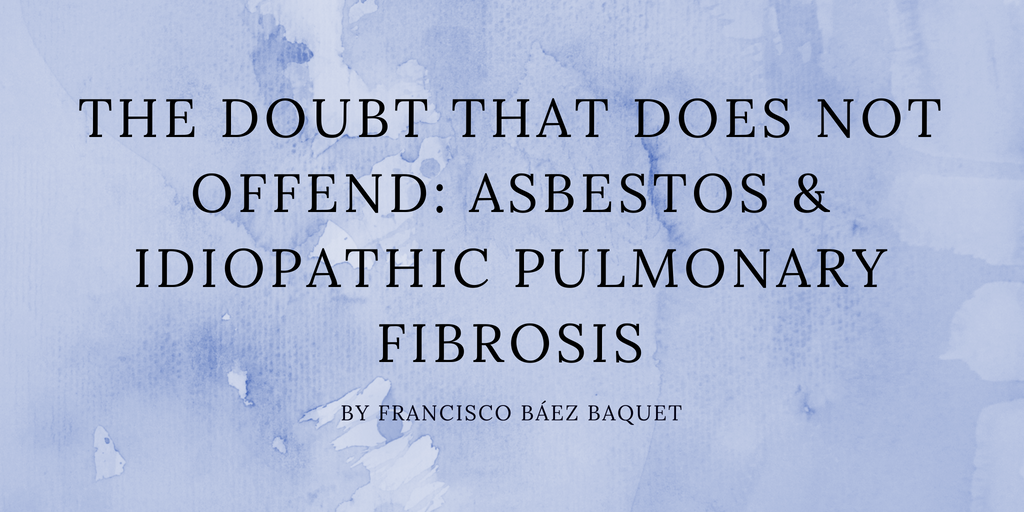 Dedication: We dedicate this work to Dr. Joan Benach, in gratitude for allowing us to disseminate information about the content of our book “Asbestos: a Genocide with impunity”, at the headquarters of the University «Pompeu Fabra» (Barcelona).

A possible causal link between exposure to asbestos and idiopathic pulmonary fibrosis (with which, that last adjective would already be inappropriate) -see: Sobradillo (2010) -, was already pointed out in Gaensler et al. (1991). See also: Taskar & Coultas (2006).

a) – Certain cases of idiopathic pulmonary fibrosis are established.

b) – A closer examination, with more powerful means (electron microscopy), determines that several of these cases classified as idiopathic fibrosis, evidence the presence of asbestos fibers in the lung parenchyma, at levels of the same order of magnitude as that found in cases clearly diagnosed as asbestosis.

c) – As a consequence of the above, these cases are re-diagnosed as asbestosis -see: Monsó et al. (1991) -. This requalification has medico-legal effects, given that asbestosis determines the right to compensation, and, on the other hand, idiopathic fibrosis does not.

d) – Acting in this way, if there really is a causal link between the so-called idiopathic fibrosis and exposure to asbestos, the casuistic evidence that these cases would provide would be eliminated. Therefore, “we would have thrown the child, along with the bath water”.

END_OF_DOCUMENT_TOKEN_TO_BE_REPLACED 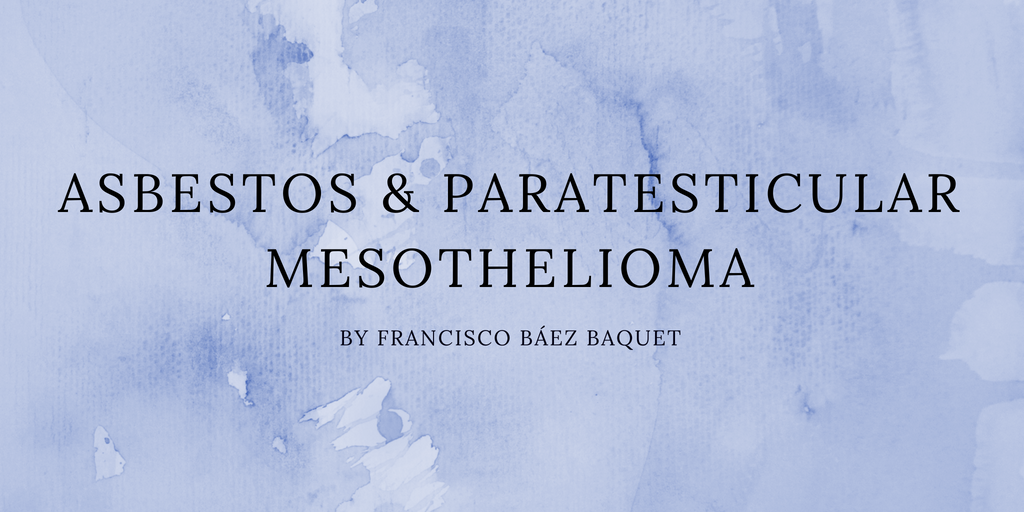 Dedication: To all the victims of asbestos … who never knew they had been.

Faced with a supposed relative deficit, of connection

In some cases, this relationship is supported by a poly-morbid condition, in which the same patient is simultaneously subjected to malignant mesothelioma settled in gonads, and to other asbestos-related pathologies: Watanabe et al. (1994). However, and unlike what happens with other settlements of malignant mesothelioma, only in a minority of cases is it possible to demonstrate this relationship.

Thus, for example, in Plas et al. (2000), we will be told that: “Reviewing the literature on asbestos exposure and mesothelioma of the tunica vaginalis, a positive history was confirmed for 34.2% of patients.”

END_OF_DOCUMENT_TOKEN_TO_BE_REPLACED 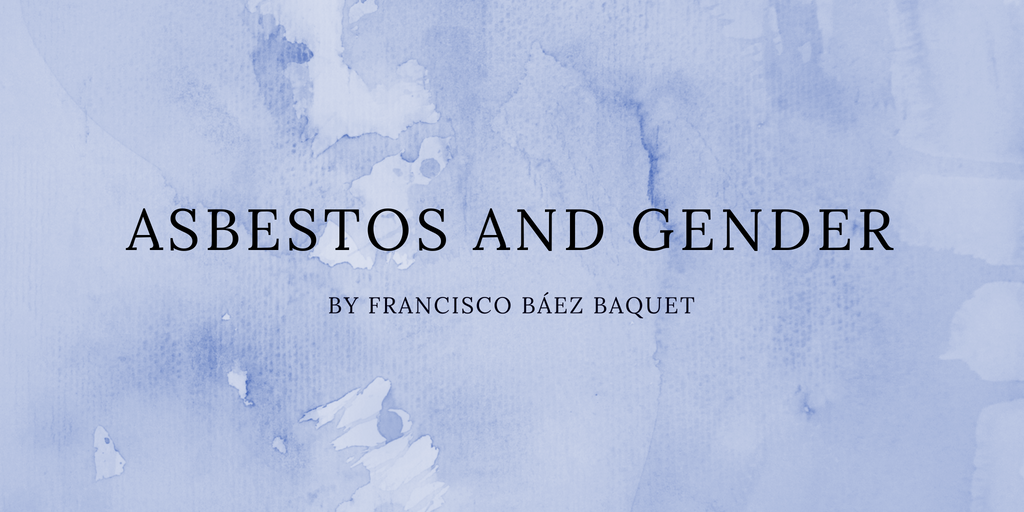 It is easy to intuit that the female gender of the author, exclusive or principal, of certain works (or, as the case may be, of all the signatories of the same), confers a special sensitivity to the content of these studies, including the same motivation for its approach. It seems to be the case, undoubtedly, of: (1)

Welcome be your professional and human interest, to help clarify several of the many facets that presents the set of all the pathologies associated with exposure to asbestos.

An example of the works with which these authors have contributed to the knowledge of the relationship between asbestos and the female gender, we will have it in the article by Maryse Bilodeau, included in our bibliography, in which the conditions of participation of the child and female labor, in the exploitation of chrysotile mines in Quebec.

END_OF_DOCUMENT_TOKEN_TO_BE_REPLACED

Pericardial mesothelioma and exposure to asbestos by Francisco Báez Baquet 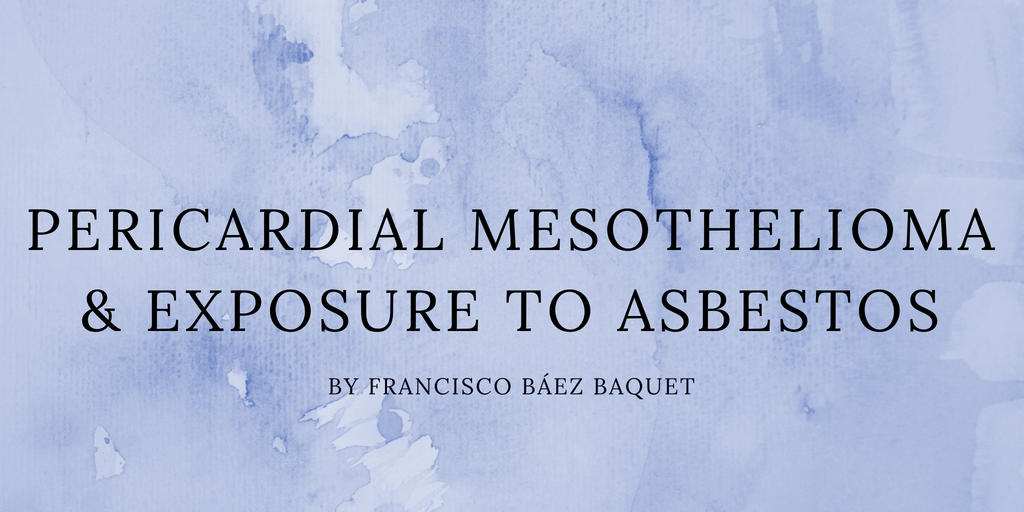 Mesothelioma -in any of its possible settlements-, in real or supposed absence of previous exposure to asbestos, remains one of the most current topics in the medical literature -see, for example: Batahar et al. (2016) -.

Extreme rigor, at the time of being able to affirm, with the maximum possible security to reach, in the current state of scientific knowledge, if indeed it is, in each case considered, a real etiological absence of asbestos -or not-, it is, in our opinion, an inescapable requirement of scientific honesty, with tangible repercussions, even outside the purely academic sphere.

The asbestos affects the entire cardiovascular system, including all its tissues and constituent organs, and therefore also the pericardium. See, in this respect, our work: